The Labyrinth at St. Stephen 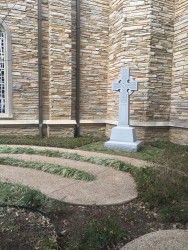 The labyrinth is a pattern and a symbol passed down through the centuries dating back over 4,000 years. The design which rose from the Christian tradition describes a meandering path that leads from the outside into the center and back out again. The St. Stephen labyrinth, dedicated on September 19, 2004, is known as an eleven circuit Chartres style labyrinth, an exact replica of the labyrinth at Chartres Cathedral in France.

Illumination may be found in the central rosette of the labyrinth where we may receive what God has to offer us. The rosette or rose has symbolized many things over the centuries, human love, enlightenment and God’s love for the world. The six petals of the rosette are said to represent either the six days of creation or the six stages of creation: The first petal representing the mineral kingdom, the second, the plant kingdom, the third, the animal kingdom, the fourth, the kingdom of human beings, the fifth, the kingdom of the angels and the sixth represents the esoteric, the unknown, the conscious being.
Around the perimeter of the labyrinth, there are 112 partial circles. These are called the lunations and are characteristic of a Chartres style labyrinth. It is thought that because the number of lunations in each quadrant of the labyrinth design corresponds to the lunar cycle, they served the ancients as a calendar, a way of counting the days until the lunar feast of Easter. Many people believe that no labyrinth walk is complete without walking the lunations.

The Prayer Garden and Outdoor Labyrinth 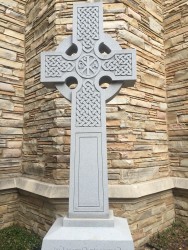 An outdoor prayer garden and labyrinth were completed in the Fall of 2006, and were dedicated on September 24, 2006.
This Labyrinth is available at any time and open to the public. A large, blue granite Celtic Cross is installed in the northwest corner, serving as a centering point for walking this labyrinth.

The St. Stephen outdoor labyrinth and prayer garden are listed on the World Wide Labyrinth Locator. This web site, sponsored by The Labyrinth Society and Veriditas, Inc., is a database of labyrinths located around the world. Visit the site by clicking here.