Our gospel lesson is a story of two trials. One is the trial of Jesus before the Sanhedrin after he is seized in the Garden of Gethsemane. The other is the trial of the apostle Peter before an informal jury of his peers, gathered around a fire in the courtyard of the high priest’s house; but it is also Peter’s trial before God—and himself. 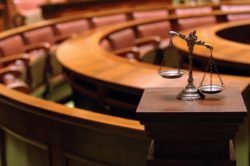 Both of these trials happen in fulfillment of Jesus’ prophecies. Jesus has predicted that he will be tried and executed by his enemies. His trial before the Sanhedrin, at the house of Caiaphas, the high priest, is the beginning of the fulfillment of that prophecy. The prophecy will be fully fulfilled when he is ordered to be executed by the Roman Proconsul Pontius Pilate and is summarily put to death on the cross.

But Peter’s trial, too, fulfills a prophecy of Jesus. At the Last Supper, Jesus predicted that all his disciples would abandon him, but Peter swore he would never leave Jesus—he would die for him if he had to. And Jesus sadly responded, “Before the cock crows twice, you will deny me three times.”

In our scripture, we find Peter desperately trying to prove this prophecy to be untrue. He should have remembered the story of Oedipus, but as a poor Galilean, he probably didn’t even know it. Oedipus was given a terrible prophecy. In order to avoid that horrible fate, he ran away; and in trying to avoid it, he actually made the prophecy come true. And that’s what happens to Peter.

Jesus’ disciples have all abandoned him, as Jesus had predicted. But in Peter’s mind, he has not abandoned Jesus. He has followed the mob that arrested Jesus, but he has followed “at a distance.” He’s made a kind of devil’s bargain with himself: “As long as I’m at a safe distance from Jesus, I still haven’t technically abandoned him.” It’s like the deals we make with ourselves when we say, “Well, if I only eat one piece of cake, I haven’t TECHNICALLY broken my diet.”

In the courtroom, a carnival of witnesses better suited to pop out of a Klown Kar than to bear witness in a court of law, gives contradictory and confusing FALSE testimony about what Jesus has done and said.

But in the courtyard, an intelligent woman servant stares and stares at Peter beside the fire until she finally bursts out with TRUTHFUL testimony about him: “You were also with Jesus, the man from Nazareth,” she announces. Apparently she had been part of the crowd who’d seized Jesus to begin with.

In the courtroom, when Jesus is confronted by false testimony, he does not say a word. In the courtyard, when Peter is confronted by TRUE testimony, he is quite loquacious: “I do not know or understand what you are talking about!” His response doesn’t seem to make much sense; but then, isn’t that often true of us, when we’re put on the spot by an uncomfortable but all too true accusation? We throw up a thicket of words, to distract from the truth. Peter then hightails it out of the courtyard and to the forecourt—even further away from Jesus than he already was—trying to get away from this woman who has recognized him.

And the cock crows for the first time. But Peter, wrapped up in his fears, doesn’t recognize this omen.

Leaving the courtyard doesn’t really solve Peter’s problem. The servant woman, perhaps worried that Peter is trying to escape, starts to tell others, “This man is one of them.” Once again Peter denies it.

In the courtroom, the high priest stands up and asks Jesus, “Are you the Messiah, the Son of the Blessed One?”

This is the moment that the entire Gospel of Mark has been building toward. Throughout Jesus’ ministry in Mark, he has never directly claimed to be the Son of God or the Messiah. He has confirmed these things only to his disciples in private and then asked them to keep it secret. But now, Jesus is being asked in a public setting, “Are you the Messiah, the Son of the Blessed One?” He is asked this not as a compliment, but as a charge brought against him that could lead to his execution.

Jesus has been silent til this moment. He has not answered a single charge brought against him. It’s quite possible that if he remains silent now, after the embarrassing and conflicting accusations brought by the witnesses against him, the prosecution’s entire case could fall apart. The glove will not fit, and they will acquit. All Jesus would need to do would be to remain silent, to take his own advice that who he is needs to stay a secret.

It is at this moment, this moment critical when everything is at stake, this moment of all moments, that Jesus chooses to speak. “Are you the Messiah, the Son of the Blessed One?” the high priest asks.

Meanwhile, in the courtyard—or now, the forecourt—Peter is confronted by several people. “You must be with Jesus,” one of them says, “because you’re a Galilean.” He can probably tell by Peter’s accent and the way he’s dressed. And if he’s a Galilean, then he must follow Jesus, because everybody knows that Jesus is Galilean.

Except, suddenly, Peter, who responds in a fury, “I do not know the man you’re talking about!”

“I do not know the man…”—this is Peter, who was the very first disciple to declare that Jesus was the Messiah, the Son of the Living God. His very words. And suddenly Peter doesn’t even know Jesus?? At the very moment that the high priest is asking Jesus, “Are you the Messiah, the Son of the Blessed One,” and Jesus is saying, “I am,” here’s Peter, who first declared Jesus to be the Messiah and God’s son, telling complete strangers that he doesn’t even know who Jesus is!

In the courtroom, Jesus’ declaration that he is the Son of Man causes an explosion. The high priest rends his garments, saying, “Do we even need to hear anymore witnesses! This man has committed blasphemy, right here in the courtroom! Are you ready to make a decision?” From that moment, judgment is swift and the decision is easy. He is guilty. Jesus is guilty.

Meanwhile, in the courtyard, Peter commits blasphemy. He swears an oath—he actually curses Jesus—to prove that he is not one of Jesus’ disciples. Think on that: Peter curses Jesus.

From that moment, judgment is swift, because the cock crows a second time. And suddenly Peter remembers what Jesus had predicted: “Before the cock crows twice, you will deny me three times.” Peter, we are told, breaks down and cried. He pronounces the verdict on himself: he is guilty. Peter  is guilty.

By the time the Gospel of Mark is written, sometime after 65 AD, Christianity had spread into many parts of the Roman empire. But persecution followed close behind. Numerous Christians were brought to trial for their faith. The problem was of course, that by proclaiming the Lordship of Jesus Christ they were denying the Lordship and for that matter the godhood of the Roman emperor. Pliny the Younger, a Roman provincial governor in the First Century, wrote a letter to Emperor Trajan about the difficulty in getting some Christians to do the civil thing and renounce their faith. He describes the Roman legal process used to ensure that a Christian has really, truly, renounced her faith—I say “her’ because he specifically describes having to execute two deaconesses, that is, women leaders of the church, because they refused to renounce their faith even after torture. Pliny says that they are offered three opportunities to deny their faith. If they do deny Christ, he would require them to take one step further: they had to pronounce the male dicere—they had to actually curse Jesus. You had to blaspheme his name. No true Christian would do that, he says. No true Christian would pronounce the male dicere on Jesus Christ.[1]

Imagine you were a Christian caught up in the Roman dragnet—dragged before the governor—tortured—given three chances to deny Christ including a chance actually to curse him; and if you were to do that, you’d be set free; but if you didn’t, you’d be killed. The church honored the martyrs, the ones who followed their Lord Jesus to the cross, or alternatively to the coliseum.

But what if you were one of the ones, and no doubt there were many, who under the pressure to renounce your faith, caved—gave in—denied Christ—even blasphemed his name? What if you had pronounced the male dicere on your Lord Jesus Christ? What if you were wracked by shame and guilt, ostracized by other Christians, perhaps even declared a traitor like Judas Iscariot, who betrayed Jesus to his death?

Then Mark, the Gospel writer, would want you to know the story of Peter—how Peter denied Jesus three times—how he actually pronounced the male dicere and cursed his Lord. Peter, who became one of the greatest leaders of the church and the most faithful of witness to Jesus Christ.

And what if you were one of those Christians who looked down on those who had cursed Christ to escape Roman execution? Well then, you do well first to give glory to God that you yourself haven’t been brought to what First Peter calls “the fiery trial”—if you were alive and had never renounced Christ, it was only because you’d somehow by the grace of God avoided the fate so many others had faced.

But second of all, you might want to consider the fact that so great a disciple and Christian hero as Peter had also denied Christ and pronounced the male dicere in order to save himself. And that if Peter could commit so heinous a sin, and recover to become a hero of the faith, who are you to judge anyone else for doing the same?

And by the time of the Gospel of Mark’s writing, there was another thing Christians knew about Peter: he was a martyr. No official record of his death exists, but it has been commonly held since the first century that Peter was executed during the reign of the Emperor Nero. I don’t know how many of you know this, but in our clerestory windows we have the shields of all the apostles. Most of them represent the way that the apostle was killed. Peter’s shows two keys, representing Jesus’ prediction that he would hold the keys to heaven and hell; and an upside down cross. Peter asked to be executed by hanging upside down on a cross, because, he said, he was not worthy to die the same way as his Lord had died.