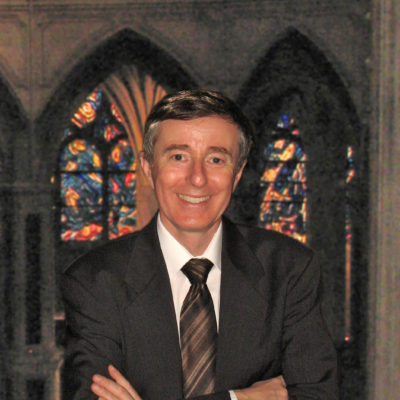 Concerts at St. Stephen is pleased to welcome French organist, Christophe Mantoux for a concert on October 22 at 7:30 pm. This event is co-sponsored by the Fort Worth Chapter of the American Guild of Organists.

French organist Christophe Mantoux is Professor of Organ at the Pôle Supérieur and the Conservatoire Régional de Paris where he teaches students from all over Europe, the United States, South America, South Korea, and Japan. Prior to his appointment in Paris, he was Professor of Organ at the Conservatoire National de Région of Strasbourg. He also holds the post of Titular Organist at the famous Church of Saint-Séverin in Paris where he has served since 1995.

His international career as a concert organist has taken him to more than twenty-five countries including countries in Europe, South America, South Korea, Japan, Canada, China and the United States. He has played some of the most prestigious instruments in Europe, including organs in the Freiberg Dom, the Jakobikirche in Lübeck, St. Wenzelskirche in Naumburg, St Bavokerk in Haarlem, the Oude Kerk in Amsterdam and the Martinikerk in Groningen; and in the United States, organs by Paul Fritts in Columbus, Tacoma, San Diego, Princeton, and at the University of Notre Dame, the Fisk organ at Stanford University, among others. He recently was invited to give a week long teaching residency and present a concert at Yale University, and has also taught at the Haarlem Summer Academy and the Europäische Orgelakademie in Leipzig. Most recently he was one of the major recitalists for the University of Notre Dame/Westfield Conference on Organs and the Reformation. In the fall of 2018, he was invited to teach at Southern Methodist University as a sabbatical replacement. He was also invited to present two short residencies at Cornell University, with a third to be given in the spring of 2019.

Christophe Mantoux has contributed articles to numerous organ journals, one in English to The American Organist (July 2008). He has recorded two CDs, one of which features the music of Guilain and Marchand, the other includes works of Jehan Alain recorded on the much celebrated Cavaillé-Coll organ in the Abbey Church of St. Ouen de Rouen (Motette 13651), which won the coveted “Grand Prix de l’Académie Charles Cros.” He recently recorded a disc of the music of Johann Sebastian Bach on the new organ built in the “Bach” style, by Dominque Thomas in Strasbourg, France, which has been released recently as a digital download at http://www.adf-bayardmusique.com/album1628-johann-sebastian-bach-oeuvres-pour-orgue-christophe-mantoux. Mr. Mantoux is represented by Penny Lorenz Artist Management.